This blog is run by members of  Cumnock History Group.

Cumnock is a town in Ayrshire and the History Group members are interested in its history and the history of its inhabitants. We have discovered that many of us are linked through marriages so we have our own big family tree in which we aim to link families who lived there and their ancestors and descendants.  We are approaching 10,000 names on the tree.

We are researching Cumnock men who fought in WW1. It started with the names on the War Memorial but has gone beyond that and includes local women who served as nurses. Read about them here http://cumnocksoldiers.blogspot.co.uk

Kay, the group secretary, has been running family history workshops in Cumnock Library and has decided to share some tips with a wider audience.  Some tips will seem pretty basic and self evident. Congratulate yourself if you knew that already!

We hope you find it helpful and do visit our site and look us up on Facebook.

Oh, and if you're wondering why this post is dated 2026, it is a cunning ploy to keep this post at the top!
Posted by Kay McMeekin at 15:46 1 comment:

Here are some suggestions for finding information for free.

familysearch.org is free. A most wonderful resource for many countries. Includes 1881 census for England and Wales


freecen.org.uk UK wide censuses.  Patchy coverage but most areas are covered in 1841.

gro.gov.uk   You can search for births and deaths in England and Wales


If you are serious, you want  to sign up to ancestry.co.uk or findmypast.co.uk  Start with a basic account.  Ancestry offers a free trial and is often free over holiday weekends.
Some libraries offer free access to ancestry.

Some records on findmypast are free to view

Also check out
http://genealogydiscount.co.uk for offers.


1940 US census is free
http://www.findmypast.co.uk/articles/world-records/full-list-of-united-states-records/census-land-and-substitutes/us-census-1940-free-access

Posted by Kay McMeekin at 15:48 No comments:

This is a computational site. I'm sure it has lots of uses.

I use it to find the day of a week a certain date was.  e.g. Try typing in your birthdate. It will tell you the day of the week and exactly how old you are with months and days. And lots more.

It comes into its own to pinpoint a date from a newspaper report.

For example I found a newspaper report of a death "last Tuesday". The date of the newspaper is 10 Sep 1864. So to find the date of death simply type in the date

10th was a Saturday so the previous Tuesday was the 6th September 1864.

Posted by Kay McMeekin at 13:22 No comments:

I had not really used this feature until recently.

I think the reason was that it gives far too many results if you type in a common name like Robert Wilson.  Yikes! 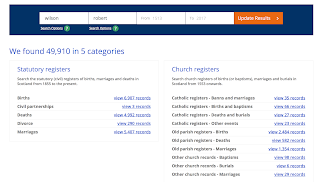 However, if the name is less common or if especially you have a middle name as well, it will give you all matching records at once.

Here are the 3 results for Edna Stewart Sinclair. You can view at each and use the back arrow to return to this screen. Result!

Posted by Kay McMeekin at 13:07 No comments:

Email ThisBlogThis!Share to TwitterShare to FacebookShare to Pinterest
Labels: scotlandspeople

I have seen examples of this before but not documented it.

I was looking at a Jessie Guthrie born about 1852. Father William Guthrie and mother Jane McKerrow.

She was baptised as Janet Morrison Guthrie in Ochiltree on 28 June 1851. (Jessie is a variant of Janet.)

She was married in Maybole in 1872 as Jessie Morrison Guthrie. Her first husband died within a few months of marriage and she married again in 1874 as Jessie McKerrow Guthrie. The parents are the same on both certificates.

Looking more closely at William Guthrie; his first wife was Janet Morrison so she was named after the first wife.  This seems a bit strange to us nowadays. I need to see if I can find the other examples of this I've seen.

Link to Jessie Guthrie on the Cumnock Connections tree


Here's another example: Ann Moodie Henderson b 1871 in Kilmarnock
Posted by Kay McMeekin at 18:23 No comments:

Email ThisBlogThis!Share to TwitterShare to FacebookShare to Pinterest
Labels: name

Who was he named after?

Middle names are often seen through the generations and this can help you be sure you have the right family.

The middle name Bigby or Begbie crops up in the Thorburn family of Ayrshire and descendants in the USA and New Zealand.   Originally though I think the name was Biggar and I think  I have traced it back to a John Biggar in the 27th Regiment of Foot, possibly born in Ireland and his daughter Mary Biggar born 1814 in Ayr who married William Thorburn and died aged only 23.  More about the Thorburns here

I spent a lot of time looking for the connection between several children with the first names William Vessie in West Kilbride, only to find that  William Vessie was the local minister! So don't assume that the unusual name in your family tree must be an ancestor!

A female ancestor of mine rejoiced in the names Christian Straton Allardice Sievwright  when all her siblings had a single given name. I thought I was on to something. But it turned out Christian Allardice Straton was the minister's daughter!

Posted by Kay McMeekin at 13:26 No comments:

Email ThisBlogThis!Share to TwitterShare to FacebookShare to Pinterest
Labels: names

The way Scotland is divided up into counties has changed several times and must be very confusing for researchers not familiar with Scotland.

For example Brechin was in Forfarshire but that is now Angus.

The county town often had the same name as the county e.g. Ayr in Ayrshire, Kirkcudbright in Kirkcudbrightshire, Dumbarton in Dunbartonshire (note the change from M to N), Inverness in Inverness-shire but there is no town called Argyll.

Other confusions are with similar place names e.g. Kilmaronock in Dunbartonshire and Kilmarnock in Ayrshire.  Dalry in Ayrshire and (St John's Town of) Dalry in Dumfriesshire. There's also a part of Edinburgh called Dalry.

There is also the problem of parish names which may not actually be the name of a village or town such as the aforementioned Troqueer.

And the parish of Loudoun in Ayrshire covered parts of Galston, Newmilns and Darvel.  There was no actual place called Loudoun although there was Loudoun Rows, near Loudoun Kirk.
Although I live in that area, I still get confused. I tend to go by the street name e.g. Brown street, Loudoun I know is in Newmilns.

The family search wiki on Scotland is very helpful.

Posted by Kay McMeekin at 16:17 No comments: